Public service fat cats and MPs get the cream

UPDATE: Liberal frontbenchers Simon Birmingham and Christopher Pyne have backed the process that delivered politicians a minimum $4000 pay rise from next week, with Senator Birmingham insisting their salaries were kept “well and truly in check”.

Australian politicians have been handed a two per cent pay rise from next Saturday on top of their current $199,040 base salary.

On top of that, they will get a tax cut as the 2 per cent budget repair levy is also due to be removed on July 1.

In justifying the decision the tribunal said it had received submissions calling for salaries more in line with the private sector.

“Over the past year there has been a notable increase in submissions to the Tribunal seeking higher remuneration for offices and individual office holders based at least in part on private sector remuneration,” the statement said.

Mr Pyne said politicians have nothing to do with determining salaries and they’re not in it for the money.

“We do it because it is a wonderful way of helping the society in which we live,” he told the Nine Network

Senator Birmingham said the pay rise came after the minimum wage was bumped up.

“It is an independent process and it was a two per cent pay rise this year, after a pay-freeze that the independent process determined last year. And of course just recently, the minimum pay rise for minimum wage was handed down at 3.3 per cent,” he told Channel Seven.

While he acknowledged parliamentarians were well remunerated Senator Birmingham said they were not there for the money.

“I think you can see the processes working to keep politicians’ salaries well and truly in check, there was a freeze, there’s a lower than the minimum wage as people would think it should be,” Senator Birmingham said.

Federal politicians, judges and top public servants will enjoy pay rises of up to $12,000 a year from next week, pushing backbench MPs’ base pay above $200,000 for the first time.

The latest rise was necessary “to attract and retain” people of “calibre”, the tribunal said, pointing out that minimum wage workers would receive a 3.3 per cent pay rise ($22.20 a week) from next month and public sector wages had increased 2.4 per cent over the year to March.

“There has been a notable ­increase in submissions to the tribunal seeking higher remun­eration for offices and individual office holders based at least in part on private sector remuneration,” the tribunal said.

It suggested the era of “economic restraint” that saw pay rise deferrals in 2014 and 2015 was over. 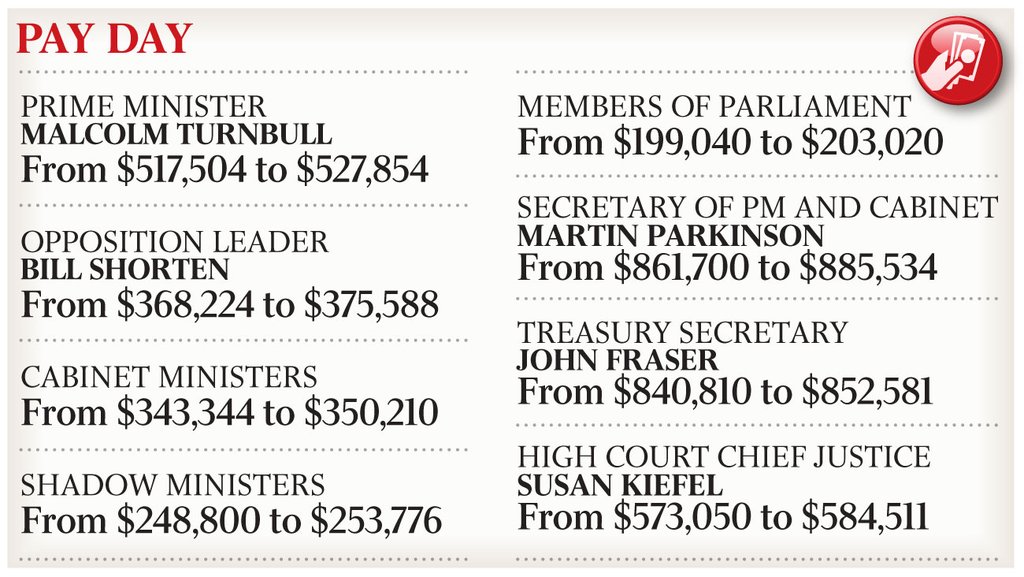 Falling private sector wage growth, which earlier this week prompted Reserve Bank governor Philip Lowe to invite workers to ask for a rise, rose 1.9 per cent over the year to March.

The Human Rights Commission president’s pay will rise to $423,650.

Some MPs questioned the pay rise last night. Liberal Democrats senator David Leyonhjelm said: “I think we are already very well paid and don’t need a pay increase at the moment. Given the state of the budget in particular, it’s ill-timed.”

Greens leader Richard Di ­Natale said “people have had a gutful”. “At a time when income inequality is out of control and wages are going nowhere, politicians get a pay rise,” he said.

Heads of the 18 government ­departments in Canberra, who earn up to $861,700 a year, will enjoy pay rises of between $9500 and $12,063, the latter going to the secretary of the Department of Prime Minister and Cabinet.

The pay increase will occur as the government’s 2 per cent budget repair levy on top-rate taxpayers end.

“This represents an increase of 1.6 per cent per annum over the 18 months since the last general increase” effective from January 2016, the statement said, noting increases were not granted in 2014 and 2015.

MPs also receive a non-taxable $276 allowance for every night of the 18 weeks a year they are in Canberra.

“This decision is a slap in the face for the thousands of commonwealth public sector workers whose wages have been frozen for well over three years as they’ve been stuck fighting for their basic workplace rights and conditions,” said Community and Public Sector Union national secretary Nadine Flood.

The 170,000 federal public servants have not had a general pay rise since the Coalition was elected in 2013 and have been locked in a battle over renewal of enterprise agreements.

Staff at the Defence Department on Wednesday became the second major department to agree to an enterprise deal which will bring a 6 per cent increase over the next 18 months.

Staff at the Australian Taxation Office and at the Department of Prime Minister and Cabinet are voting on the pay deal today.

“This decision will certainly give frontline public sector workers the impression that there’s one set of rules for them and quite another for those at the top,’’ Ms Flood said.

“The main reason for the delay in employees receiving a pay increase is the CPSU’s persistent campaign opposing salary increases that have been on offer for 3 years for most of the employees. The increases offered have been for an average 2% a year over a 3 year term,” he told The Australian.

“The generous pay and conditions of public servants are not under threat.”